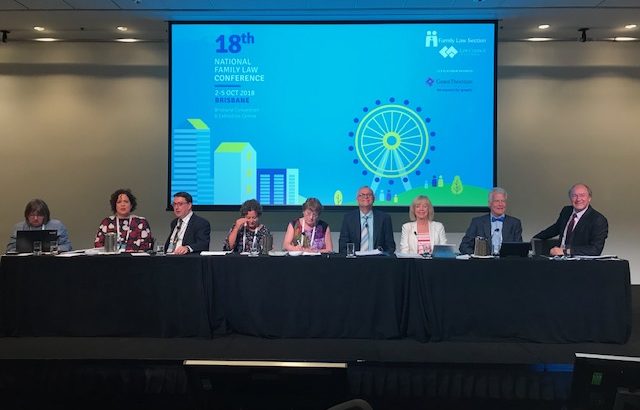 Here, she offers her reporting:

I was delighted when we were invited to make a presentation at the 18th National Family Law Conference in Brisbane in October 2018.

As outcomes for parties can be markedly different depending on whether a case takes place in the UK or in Australia, we decided to call our talk “We speak the same language but say different things”

A great deal of work and discussion (across time zones) resulted in a group of 9, 5 based in the UK and 4 in Australia speaking at the conference to an audience of about 80 lawyers.  There was an enormous amount to cover in one hour, but we managed it – just!

We opened with a quick whistle stop tour through the differences in each jurisdiction in respect of the disclosure of information and documentation in financial remedy proceedings.  Whilst both Australia and the UK have robust ways of ensuring full disclosure, in the UK we tend to require the party to do this with the threat of being sent to prison if they do not, but in Australia the approach is to contact third parties such as banks with an order requiring them to produce documents.

Members of the panel then looked at the differences between the approach in the UK and Australia in the following three key areas:

To conclude, if you have ties to both the UK and Australia and think that you may have a choice as to which jurisdiction to pursue your case in, please feel free to contact Margaret (margaret@j-lg.com / 020 3709 8975) for an informal no obligation chat.